Ski Blog – Artesina 2020
After a very early start and a long journey we finally arrived in the ski resort of Artesina. We had a lengthy check in to the hotel, ate a fantastic evening meal before heading to collect our ski equipment. Students then returned to their rooms and an early night was had by most, they must have been tired. 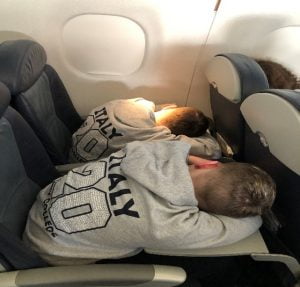 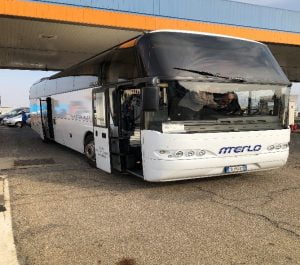 Day 1 – Skiing begins
Today dawned bright, with clear skies and beautiful sunshine. The ski conditions were great, and students ventured out onto the slopes for their first taste of skiing in the Italian Alps. 27 students have not skied before and they headed to the nursery slopes, before long they were all sliding, stopping and beginning to experiment with turning. Some comedy falls and early frustrations soon passed, and students were making great strides… I don’t think we’ll have 27 beginners for very long.
The more experienced members of the group took to the higher slopes of the resort and began to experience some of the fantastic skiing that is on offer. There are some brilliant runs and the weather was amazing, offering views all the way along the high mountains of the European Alps and out across the flat lands of northern Italy. There have been numerous candidates for the Ski Muppet awards and, new to this year, the Ski Legend award. The Ski Muppet may just be visible in one of the pictures below (PS look for the silly hat). 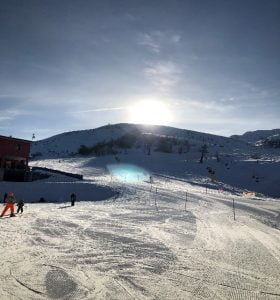 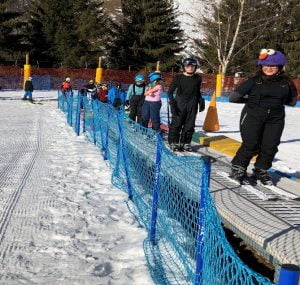 Day 2 – Wind stops play!!!
Day 2 dawned bright, with stunning blue skies, but unfortunately high winds were forecast which, ultimately would have a big impact on the day. The beginners once again headed to the nursery slopes to gain more confidence with turning. They are making rapid progress and by the afternoon one group were using poles. Some students are still a little inconsistent, and there have continued to be some comedy moments. There is a catch-fence at the bottom of the nursery slope and frequently it’s doing its job and catching students. The magic carpet lift, which is like a travellator in an airport, has caused some very comedy moments, and resulted in one person’s fall earning them Ski Muppet; another, students fell and caused a domino effect up the lift! The instructors have said they will be on the nursery slopes tomorrow morning for a couple of hours, before trying out the chair lifts for the first time and heading to some of the higher blue runs.
The more experienced skiers headed down to Artisena 1300 to catch the chair lifts up to the highest part of the resort. This involves skiing down a snow-covered road and then catching a fast chair lift up the mountain, followed by a long double drag lift. Both groups arrived at the top of chair lift to be met with strong winds. By the time the groups had skied to the bottom of the chair lift, all the lifts up the mountain had been closed and the group where left stranded in the lower part of Artesina. The only way back to the hotel, with the lifts closed, was a long walk back up the snow-covered road, this was not a popular decision but needs must and some 40 minutes later 20 very tired students arrived back at the hotel and the nursery slopes.
Despite the wind, the weather stayed very sunny and sun cream was a must. All the students were now confined to nursery slopes and improving technique was the focus of the rest of the morning. By the time we ventured back onto the slopes for the afternoon session, the wind had dropped enough to allow one chair lift to reopen. Fortunately, the resort is very quiet and more experienced student were able to alternate between 3 good runs.
The instructors (and the weather forecast) have confidently predicted no wind tomorrow, so normal service should resume. 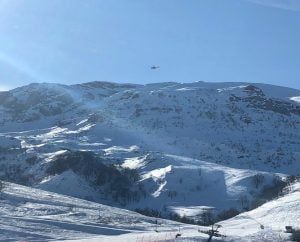 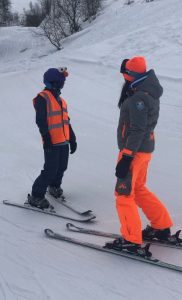 Day 3 – Helicopters and Hospitals
Day three has been eventful and will live long in the memory of the staff. The beginners had a quick warm-up on the nursery slopes before heading up the slopes on their first chair lift. Mr Boardman was positioned at the top with his camera, ready to capture the usual comedy falls as students slide off at the top… but, much to his surprise no falls occurred, they are better than in previous years. They then skied down their first blue run and the last 100m of a red run to catch the lift up again.
The more experienced skiers were away up to the top of the resort that yesterday had been shut due to the high winds. They then tackled their first black runs without any incident and confidence grew rapidly… and that was when the trouble started! One student was confidently linking lovely parallel turns together when they caught an edge, crossed skies and tumbled headfirst down the slope. 6 off duty firemen and a passing paramedic came to her aid and soon a helicopter was coming into view over the horizon! Another student then took a tumble and after experiencing lots of pain in their lower leg, the ski patrol again called the helicopter and off to hospital they went to join the student already there. Thankfully, there were no major injuries and although one the students needed an overnight stay in hospital for cautionary observations, everybody is back at the hotel now and on the mend. 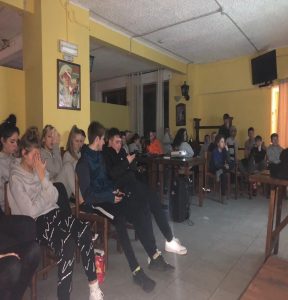 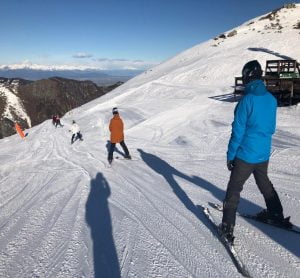 Day 4 – A quiet, calm and thankfully boring day…
The beginners have ventured higher up the mountain today to experience more of the resorts excellent skiing. They adapted to their new challenges with no major incidents, much to the relief of the staff! There were the usual comical moments, like the two boys who forgot to lift the safety bar as the came to the end of the chair lift… thankfully the chair lift attendant was on hand to stop the chair lift and help them disembark. Today’s birthday girl somehow managed to lose one ski at the start of a very long lift, lucky a very nice Italian man collected the ski and brought it to her at the top. Comedy moments aside, the beginners are really starting to develop their skills and linking snowplough turns with parallel ski traverses and their confidence is visible growing.
The more experienced skiers continued to range far and wide across the resort. One student did, for reasons best known to themselves, decide to closely inspect a ditch at the side of a run? Another student fell asleep on a drag lift 30 meters from the top and then just held on to be dragged along the floor until finally letting go of the tow to be left lying in a heap of ski and polls. We have been telling the students they need their sleep, but clearly, he hasn’t been listening!
The standout moment from the today is that there were no helicopters (at least not for any of our students) and no trips to hospital. Let’s hope that our last tomorrow is the same. 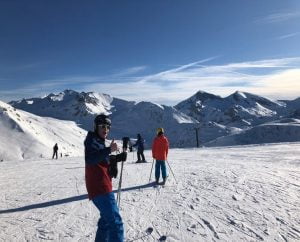 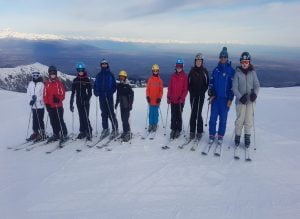