Apprentice of the Year Award

September 7, 2018 by Alison Whitlock Comments Off on Apprentice of the Year Award

Female Apprentice of the Year Award 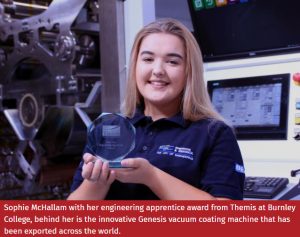 TEENAGER Sophie McHallam proved herself in a man’s world by scooping the title of First Year Engineering Apprentice with Themis at Burnley College.

She works for high-tech engineering firm Emerson & Renwick in Church, which this year is celebrating its centenary, won the top Beacon award at Hyndburn Business Awards and has its busiest ever order book.

Sophie, 17, from Burnley, is a former student at the town’s Unity College.

She said: “I tried engineering at high school and I enjoyed it, but then the course changed and it didn’t continue.”

“Burnley College helped me to find an apprenticeship and I was taken on at Emerson & Renwick.”

“There were 85 students on my NVQ Level 2 in Mechanical Engineering and only four of us were female. I find it easier learning with boys, as I like to compete and be just as good.”

“I like having hands-on experience and I like to find out how things work, but I never expected to win an award.”

“I have learnt about turning and milling and also sheet metal and I was entered into the World Skills national competition by the college.”

Engineering Manager Michael Wright said: “We had taken on three general apprentices and then we decided to take on an extra person to specifically train to work in mechanical design engineering.

“When we contacted the college and they suggested Sophie, but as we were late in recruiting, she was later starting the course than the other students.”

“She has really excelled, she quickly caught up and has shown real aptitude and skills for engineering.”

“I myself started as an apprentice with Emerson & Renwick 35 years ago and have worked my way up with the business, as have several others.”

“When staff are externally recognised for their achievements, it is a great morale booster for the entire workforce.”

Now her first year is complete, Sophie is based at the Church head office and on day release at college.