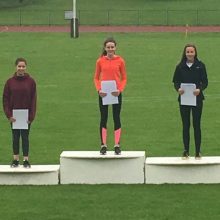 June 28, 2017 by Alison Whitlock Comments Off on Lancashire County Athletics Lancashire County Athletics competition was held at Stanley Park Blackpool on Saturday 12th June. From the Burnley Borough there were 6 students who represented the area. Three of these students came from Unity College.

Despite the weather not being in the athletes favour all three girls did a fantastic job, all coming in the top 5 positions. Imogen Mansfield secured 3rd place in her event, and now awaits confirmation on when the regional finals are.