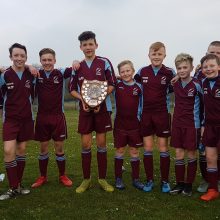 After beating Blessed Trinity on penalties and Sir John Thursby in the semi-final, 6-3 after extra time, on Monday, the Unity College team won the Presidents Shield final last night against Shuttleworth College 3-1.  With Noah McGibbon scoring all three goals. It is the first time since 1963 that the school have won the trophy in two successive seasons and as far as we are aware we have only ever won that trophy four times in total. Well done team!